Binary games is a new game development company created alongside an already successful IT company based in Melbourne, Australia. The two of us love games, so we decided to expand our business in a new direction. Like most people, we rarely have time to play long strategy games, so our first game is short and fun, but with hidden strategic depth as well. 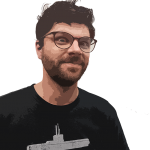 From a young age, I was fascinated with computers, electronics, and video games. Growing up, my first console was a NES and I dreamt of being able to make my own games. When I wasn’t playing video games or pulling apart things or building computers, I was playing old school board games like monopoly, UNO, Guess Who, chess, drafts with my friends or family members. Years went by and I continued to play video games and build computers but due to the lack of variety of tabletop and card games, they were pushed aside. It wasn’t until meeting Chris years later and him introducing me to new tabletop and card games like Splendor, Resistance, Love Letter, Fluxx, and Bang. I was hooked and these games reignited a love of tabletop and card games for me.

Chris
As the youngest of four sons, games were an integral part of my life growing up. I couldn’t afford to buy games so one of my first coding experiences was creating a text adventure on an Amstrad computer when I was seven. Since then I’ve loved playing and creating games of all types, and I’m always on the hunt for new gameplay experiences.

One of my favourite card games of all time is 500, which I picked up while studying at University. It’s a trick collecting, bidding, and bluffing game. FruitFight! takes some of the elements of 500, but blends in new gameplay ideas in a fun, accessible and family friendly format.

Any cookies that may not be particularly necessary for the website to function and is used specifically to collect user personal data via analytics, ads, other embedded contents are termed as non-necessary cookies. It is mandatory to procure user consent prior to running these cookies on your website.